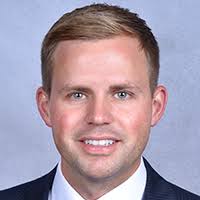 Nic Barlage was named President of Business Operations for the Cleveland Cavaliers in September 2017.

Prior to joining the Cavaliers, Barlage was the Senior Vice President and Chief Sales Officer for the Phoenix Suns, where he oversaw the team’s premium and ticket sales and marketing efforts. He began serving his stint with the Suns during the 2013-14 season.

Barlage was part of the Cavaliers organization for five seasons where he was most recently Vice President of Sales and Service before departing for Phoenix in 2014. Prior to his tenure in Cleveland, Barlage spent one season with the Suns and two seasons with the Charlotte Bobcats specializing in suite and premium seating.

Barlage graduated from Saint John’s University (Minnesota) in May of 2006, where he majored in Psychology. He and his wife, Traci, have two daughters, Brooklyn and Kennedy.