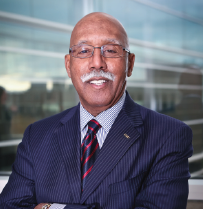 As Executive in Residence from 2006 to 2019, Dr. Julian Earls was often seen in the Monte Ahuja College of Business and across campus at Cleveland State University. His biography for Executive in Residence located here does not fully describe his involvement with CSU and with the community. Dr. Earls also served as the interim Vice President of Civic Engagement for Cleveland State University and special advisor to two CSU presidents.

A frequent guest speaker at Cleveland State University and other colleges and universities, in August of 2016, Dr. Earls was the featured speaker at the University of Maryland Eastern Shore's 2016 Founders' Day convocation and summer commencement exercises.

Dr. Earls is the founder of the Development Fund for Black Students in science, technology, engineering and math fields. The fund provides college scholarships to students who attend historically black institutions.

The former director of NASA Glenn Research Center, Dr. Earls managed an annual budget of approximately $773 million and oversaw a workforce of 1,920 civil service employees and 1,300 on-site support service contractors. While at NASA, he wrote for technical and educational journals and authored the first health physics guides used at NASA. On two occasions, he was awarded NASA medals for exceptional achievement and outstanding leadership and he has also received the Presidential Rank Award of Meritorious Executive.

Dr. Earls served as Grand Marshal for Fall 2015 Homecoming, providing opening remarks at the Grand Marshall Luncheon and leading the parade from Krenzler Field east bound on Chestnut, ending on the front lawn of Mather Mansion for the VikeFest Celebration.

Dr. Earls received an honorary doctorate of science from CSU at Spring 2015 Commencement.

“It was a humbling and unexpected honor,” he told The Call & Post. “All I’ve been trying to do here is to be of service to the students and to the community.”

An avid runner Dr. Earls has completed over 25 marathons, including the Boston Marathon. Dr. Earls was honored to be selected a Torchbearer for the Salt Lake 2002 Winter Olympic Games. He carried the Olympic Flame for a segment of the Olympic Torch Run through Cleveland, Ohio, on January 1, 2002.

Dr. Julian M. Earls is the retired Director of the National Aeronautics and Space Administration's Glenn Research Center at Lewis Field in Cleveland, Ohio where he served from October 2003 until December 2005. Previously, he served as Glenn's Deputy Director. As Director, Dr. Earls was responsible for planning, organizing and directing the activities required to accomplish the missions assigned to the Center. Dr. Earls joined the Monte Ahuja College of Business as Executive in Residence in 2006.

Since beginning his career with NASA in 1965 at the Lewis Research Center, renamed to the Glenn Research Center in 1999, Dr. Earls has written 28 publications for technical and educational journals. He wrote the first health physics guides used at NASA. He has been a Distinguished Honors Visiting Professor at numerous universities throughout the Nation. On two occasions, he has been awarded NASA medals for exceptional achievement and outstanding leadership, and has received the Presidential Rank Award of Meritorious Executive.