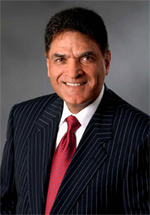 Monte Ahuja came to the U.S. in 1969 as a student at The Ohio State University in Columbus, Ohio. Graduated from OSU in 1970 with a Master's Degree in Mechanical Engineering. Moved to Cleveland in 1972 and while working full time earned MBA Degree from Cleveland State University in 1975, graduating with honors (Beta Gamma Sigma).

In 1975, launched a distribution company immediately following the graduation from CSU with an MBA. Through internal growth and careful strategic planning, grew the company, Transtar Industries, into an international business, as the leading U.S. company in the distribution of automotive transmission replacement parts to the aftermarket. The business was sold in 2010 and then re-acquired in 2017. Mr. Ahuja is currently Chairman, CEO of MURA Holdings LLC, an investment company and Transtar Industries.

Transtar earned dozens of awards for its outstanding growth and community involvement, including the Arthur Anderson 2000 Leadership Award, the Inside Business NEO Success Award, the Association of Corporate Growth Deal Makers Award, Governor's "E" Award (twice) for excellence in export and runner-up for the National Entrepreneur of the Year competition, sponsored by INC. Magazine and Ernst & Young in 1995.

Served as Trustee of the Cleveland State University Board for nine years (1991-2000) and its Chairman of the Board for six years. In 1999, CSU named the new Business School building ‘Monte Ahuja Hall', as its new home for the College of Business Administration.

Currently serving as a member of the board/trustees for the following organizations: