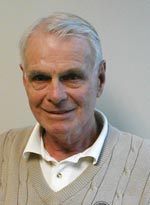 When Adjunct Instructor Fred Friend taught his first class at CSU in 1965, the State of Ohio had just taken over tiny Fenn College and turned it into the new Cleveland State University. At that time, Friend remembers there were just two buildings in which classes were held as compared to how the campus looks today.

Born and raised in Bellevue, Ohio, Friend attended the University of Notre Dame and later graduated from Cleveland Marshall College of Law, going to school at nights while raising his family, like many of our current CSU students. In his subsequent 50 plus year career, Friend has served as a probate and real estate attorney, magistrate in the Cuyahoga Probate Court and attorney for the Union Savings Association, all the while, teaching regularly at CSU.