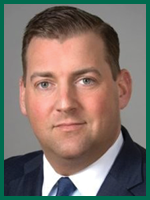 In the third of our USMCA webinar series, Daniel D. Ujczo, Practice Group Chair, International and Regional Practices, U.S.-Canada for Dickinson Wright will discuss the differences between NAFTA and the USMCA in-depth. This session will:

Dan is an international trade and customs lawyer who specializes in Canada-United States and North American matters. Dan is currently the Practice Group Chair for Dickinson Wright’s innovative Canada-US and USMCA Platforms which include more than 300 attorneys practicing throughout North America. A United States licensed lawyer, Dan is one of the few individuals that has served in the U.S. and Canadian governments, as well as private practice and academia. Dan is the President of the Ohio-Canada Business Association and he serves on the boards of the American Chamber of Commerce in Canada and the North American Strategy for Competitiveness (NASCO). Dan founded the U.S.-Canada S.A.G.E. initiative that is a collaboration of more than 300 U.S. and Canadian business associations to address the USMCA renegotiation process. He frequently testifies before U.S., State and Canadian governmental agencies and his commentary may be found in various media outlets including The Wall Street Journal, The Washington Post, U.S. News and World Reports, Politico, Bloomberg News, The Globe and Mail, the CBC and the Business News Network.